I took the girls swimming this morning, but we left early as Amy said she wasn't feeling well and wanted to go home. This is very unlike her and since it's a 30 minute walk home from town I decided to catch the bus instead.

I usually avoid taking the bus where possible. Our bus drivers seem to have little patience for anyone with a pushchair or young children. We get on the bus and I place the pushchair in the bit where you put pushchairs (what is that called?) and apply the brake (apart from the swim bag in the shopping tray of the pushchair there was nothing else in it). As Amy was feeling unwell and clingy she wanted to sit on my lap for the journey.

It was then that I experienced something I never thought I would in a bus G Force!

The bus driver took off at amazing speed causing a few of the elderly passengers still taking their seats to grab on for dear life. He flew round the corner which caused the buggy to tip over, nearly taking a little old lady with it. I apologised profusely while juggling an upset toddler and swim bag and attempted to right the pushchair.

The driver didn't stop or even slow, but instead buffered us about the bus like pinballs as I struggled to ram the pushchair into the bay bit so it wouldn't fall.

I then spent the rest of the journey trying to stop the girls being catapulted to the front of the bus when we stopped and hurled to the back when ever we pulled away.

The most stressful bus ride I have had in the long time.
Posted by SeaThreePeeO No comments:

My baby is no longer a baby! Big bed time.

Now I am firmly of the opinion that children should be shoehorned into their cot for as long as humanly possible or until they learn to escape.

At two years old I thought we still had a fair while before we transferred Amy from the cot to a big girls bed. That was until my DH phoned me in the middle of town to announce that he had purchased a bed plus mattress for Amy and it was being delivered that afternoon.

As Amy is likely to be my last child a tiny part of me, well, okay a rather large, quivering part of me wanted to cling desperately onto the last strands of her babyhood.

Que me rushing to get home before the bed and forgetting 99% of the stuff I went into town for in the first place. We remembered the balloon animal tiger that the clowns were selling in the street today. Most important thing I think you'll understand.

I get home and five minutes later two men man handle a ready-made up bed into my hallway where they refused to take it upstairs and told me I would have to dismantle it and do it myself. I really didn't fit in the hallway so at the risk of eyes being gouged out it had to move.

Several sweaty hours, scratched walls and swear words later I manage to get the bed upstairs and reassembled in Amy's room. After having dismantled the cot. It looks odd and Amy's room is now teeny tiny. I had to rearrange the furniture to fit it in. Oh and on a positive note Amy has learnt to say 'Oh c**p!'

I was all geared up for a terrible evening attempting to keep Amy in her new bed via the use of bungee straps. But the little stinker was out like a light!
Posted by SeaThreePeeO No comments:

Spurred on by the fact that Amy loved her first proper swim it was decided that today we would get up early and all go for a family swim.
Everyone seemed to enjoy themselves and Amy soon grew tried of the baby pool and decided that the big pool was for her. She loved floating around in her rubber ring and kicking her legs.
Ana also had a good time playing with a group of young boys, that was of course until some bigger boys turned up to spoil the fun. It was then that we decided to leave the leisure centre and take the bus home to some delicious bacon baps. Mmmm
Posted by SeaThreePeeO No comments:

After the rain comes the sun, and some rainbows too. 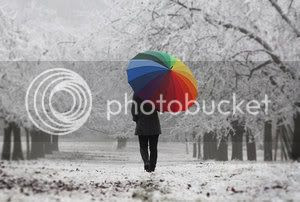 A couple of months ago Amy manged to completely disable our laptop. Her crime? Simply tripping over the power supply lead while the laptop was charging. All that happened was the power supply lead became detached, or so we thought.
It soon became apparent that the laptop would no longer turn on, let alone charge. At first we thought this was due to the charger being damaged in the 'accident' so we managed to get our hands on another one. Still no joy. It was then it hit us like a sledge hammer, our laptop, faithful friend, warm companion on those cold winter nights was in fact *gasp* DEAD! Of course it had just so happened to manage it's death throws with all of our data suck on it.
The most upsetting thing, for me at least, was that now precious photographs of my children (and pets) some from birth, Christmases and birthdays were now trapped forever in their plastic and silicone prison. The charge for breaking them free? Upwards of £500 plus VAT.
Things looked bleak, very bleak indeed. Bleaker then a bleak thing in bleakdom.
That was until today. Somewhere in the recesses of my memory bank I recalled having transferred most of the photographs in question on to the laptop *rest his semiconductor soul* from our archaic PC via CD ROM. Well, I found that CD ROM! It also just so happens that any later photographs that I have taken have all been stored in my photobucket albums.
For now at least, the god smile upon us!
Posted by SeaThreePeeO No comments: 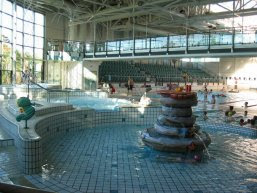 Yesterday while Ana was at the Madhouse Activity Club, myself and Vincent took Amy swimming for the first time. To be honest I was expecting her to hate the very idea of getting in the pool. I realised that Amy doesn't really take to new things to well the moment I had to drag her screaming in protest to the top of a small slide in Cheeky Charlie's. Once I had forcefully shoved her down said slide it was then that she squealed, 'again!'

Well, she loved it and to my surprise even managed to swim a little while wearing her arm bands, declaring that she was a fish and a mermaid. She decided that the slide which plummets into the shallow end of the baby pool was the greatest fun of all time, even on occasions complete immersing herself under the water.

Of course there were a few protests when it was time to leave came, but all in all a great time was had.
Posted by SeaThreePeeO No comments: 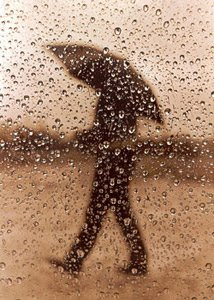 Yesterday and in fact today you said that it was going to rain, not just rain but precipitation of monsoon proportions for Thursday and indeed most of the week.

It was because of this information that I cancelled a picnic due to take place in the park to alleviate summer holiday boredom. Also it was decided that, as it was going to bucket it down from our waking hour until we slipped soundly off to sleep to a lullaby of raindrops beating on the windowsill, I would not water the plants in the garden.

Please forgive me if I seem a little confused to you, as we have been basking in glorious sunshine for most of the day. It even became so warm at one point I was forced to refill the paddling pool.

So there we have it, a perfectly fabulous day, wasted!
Posted by SeaThreePeeO No comments:

Yesterday we finally mananged to get a new paddling pool after we returned the faulty one. Here are the girls testing it out on what can only be described as a rather cool day. Still the rain held off until they came out bluer then they went in!

Bargain!
Since then I have been endlessly entertaining myself spelling out rude words and leaving covert messages on the fridge for Vincent.
Yesterday afternoon Amy even did a portrait of daddy (with a little help). What do you think? Spitting image! 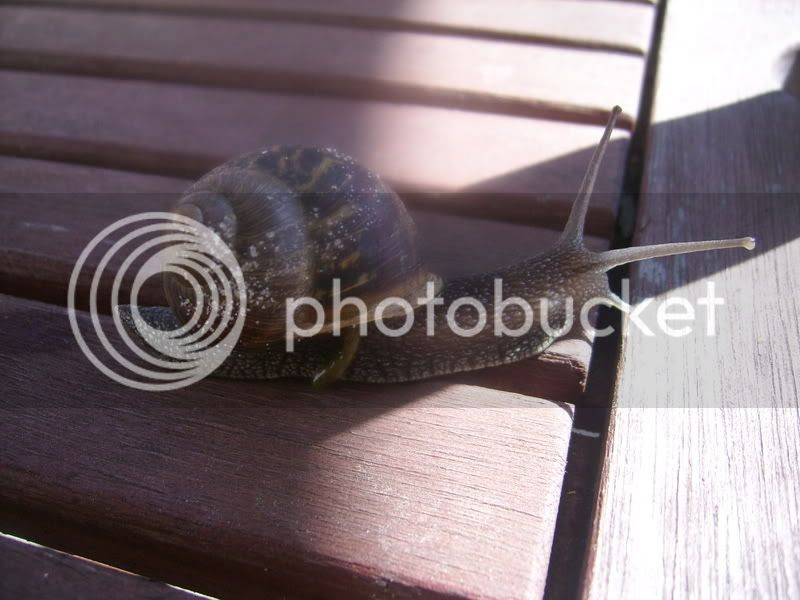 It was a bright but very damp start to this morning thanks to the overnight rain. Amy happily spent her time collecting the many garden snails that were resting on the fence in the morning sunshine. 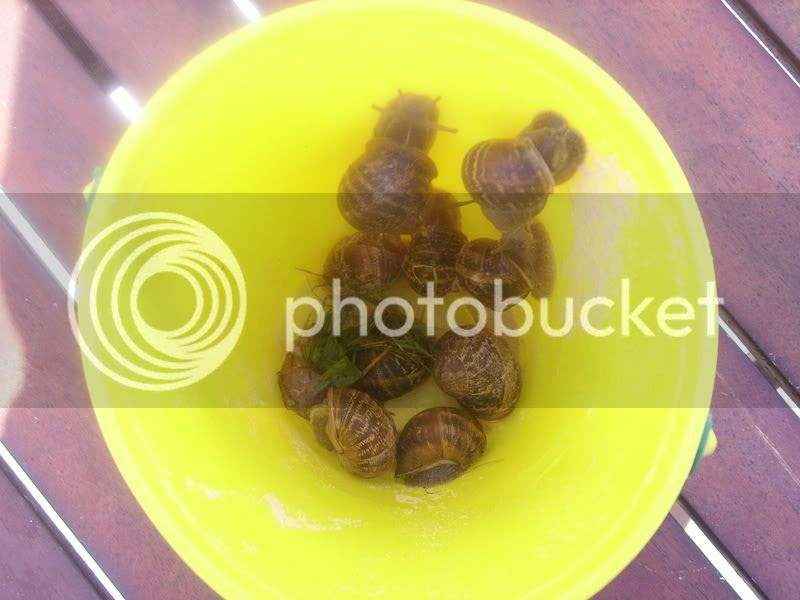 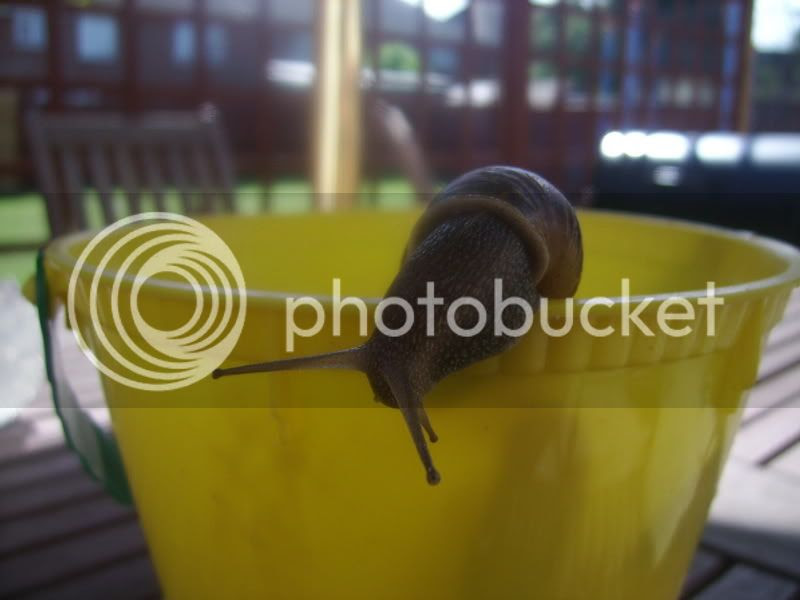 A Rainy Day At The Beach 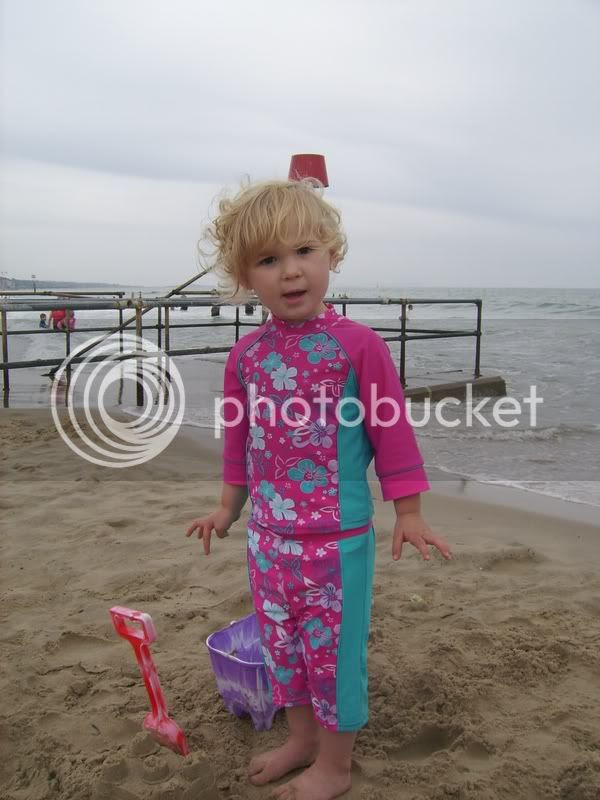 Thursday we decided to take the girls to Bournemouth Beach for a treat. It was just a shame that it did nothing but rain when we got there, still a good time was had by all.

Getting there on the train wasn't half as bad as I expected it to be. We left Maidenhead at 09:10 and arrived at Bournemouth Station at 11:30. Of course finding the seafront wasn't nearly as simple. I couldn't believe that such a major tourist attraction wouldn't be signposted straight from the station.

However we found it in the end just in time for the heavens to open! It was still quite warm so we decided to brave it and get to making sand castles. 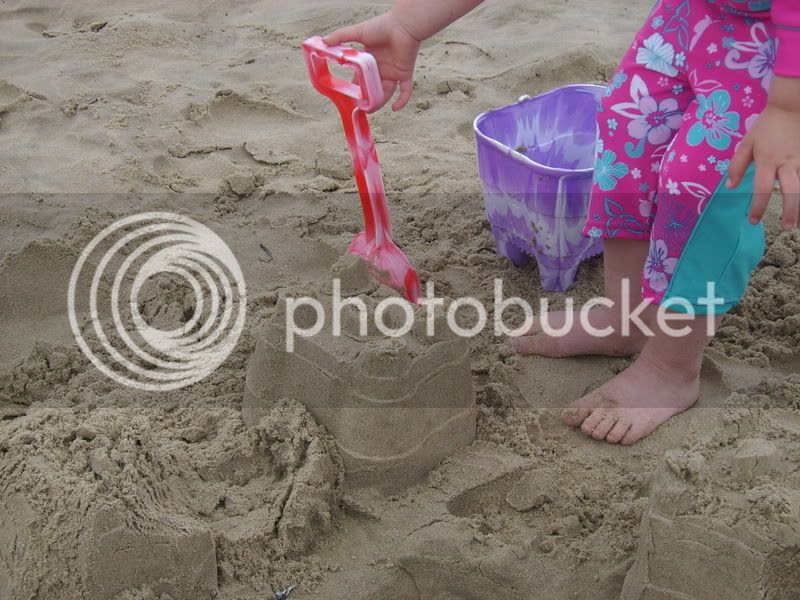 After which Amy had a great time smashing them down again before she noticed the sea. "Look mummy, a river!" 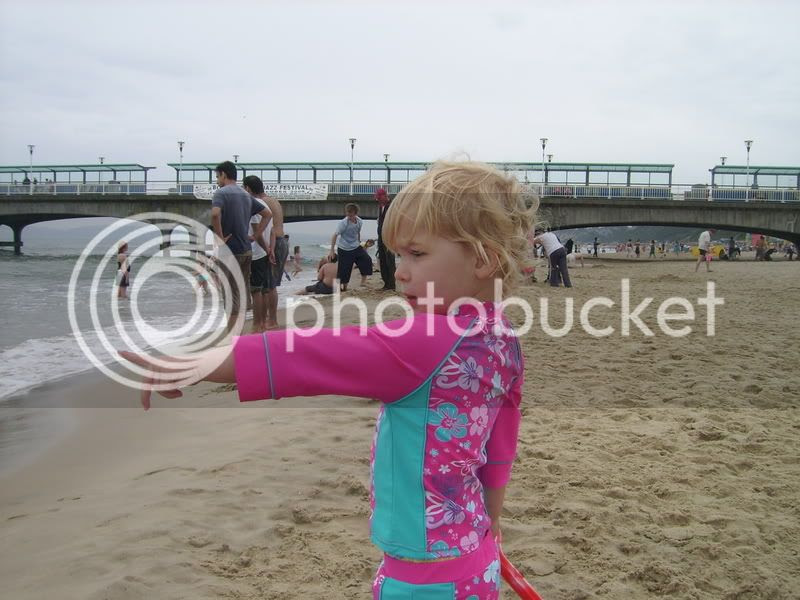 It wasn't long before the rain became heavier and we decided it was time to seek shelter and what better place to do that then the Oceanaruim. The girls had a fantastic time watching Sharks, Rays and Sea Turtles swiming above their heads. In fact I think they had more fun there then on the beach. 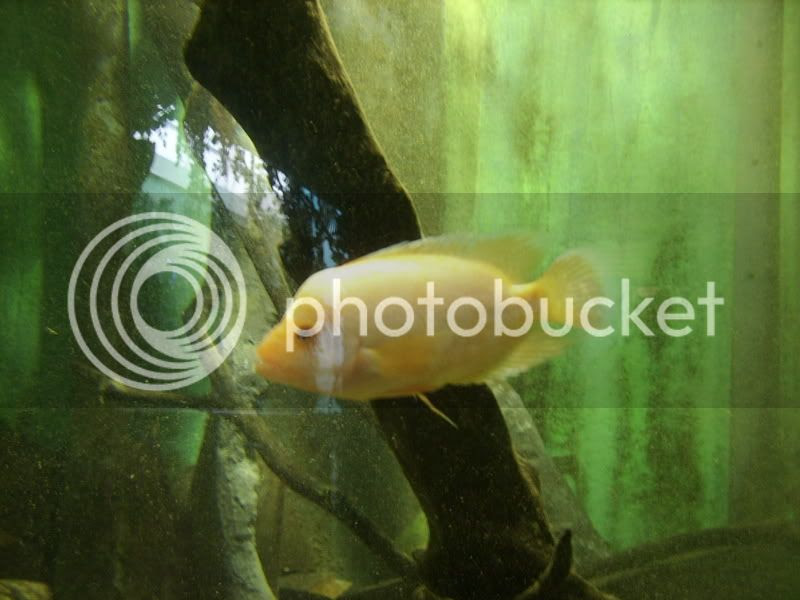 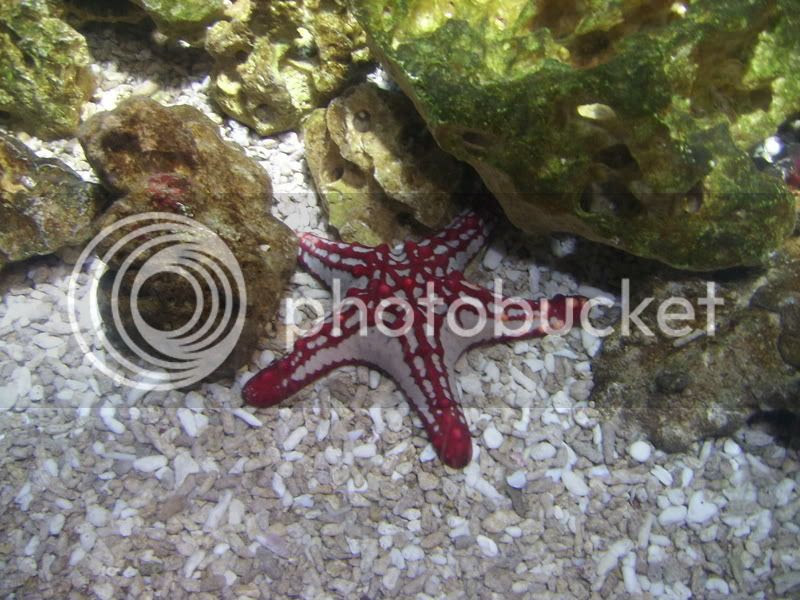 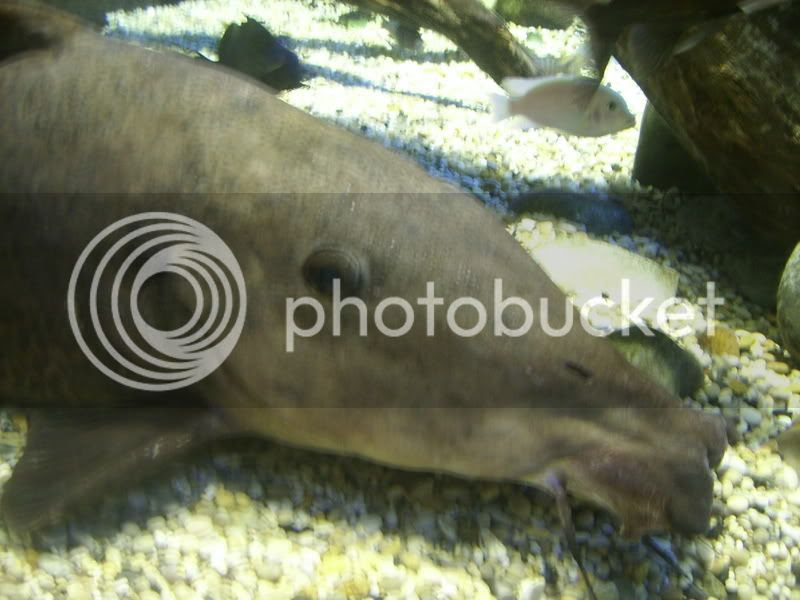 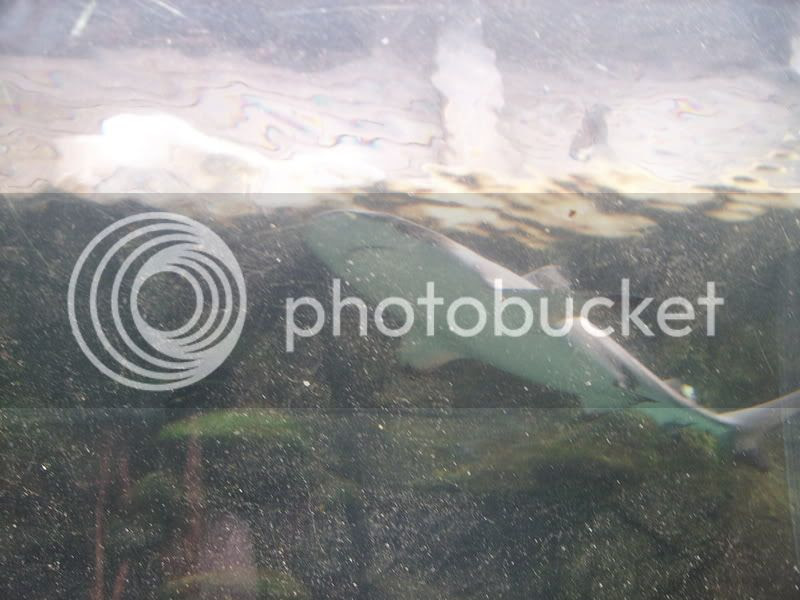